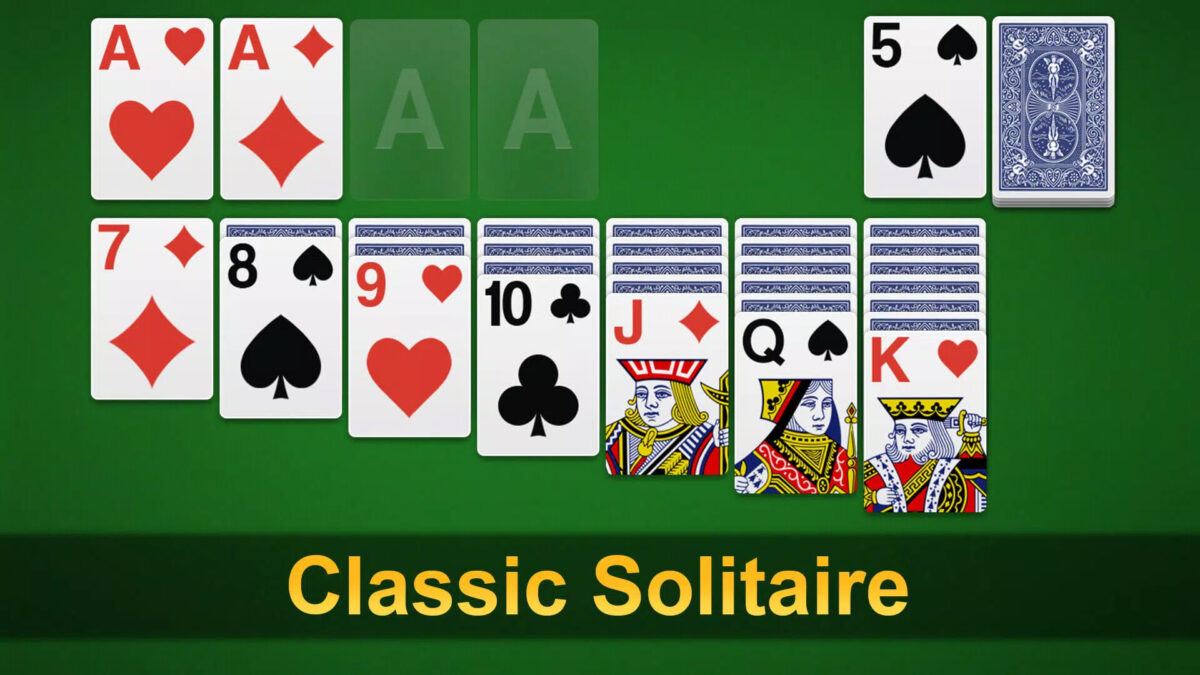 The evolution of solitaire games, sometimes patience games or cable games, has been impressive.

Although a lot has changed since the days of desktop solitaire, the basic gameplay is still the same, and there have even been some fun additions.

Unlike more common card games like Rummy or Poker, which often include several players, solitaire games are played alone.

Playing these simple card games might help improve your focus and other abilities.

The following are familiar to the majority of solitaire games:

The cards of a deck are placed in one or more foundation piles, ordered numerically, and all identical suits.

This pile may start empty or marked with “foundation cards,” such as the ace of each suit, from which a higher-ranking deck would be constructed.

Any cards that can’t be added to the construction pile may be temporarily put in the tableau, as long as the criteria for card placement are followed.

Toss any cards you don’t want in your foundations or tableau into the stockpile, a wastepile.

A shuffled deck of cards, or two decks shuffled together, is used by players to flip over and add to the foundation pile one card at a time.

In no particular order, therefore, here are the ten best online solitaire card games that you may play whenever you want and never get bored with.

The Different Games of Solitaire

The Klondike area of Canada is credited with giving its name to the most well-known variant of Solitaire, which dates back to the nineteenth century. Due to its widespread popularity, Klondike Solitaire is often referred to as Solitaire.

A total of seven columns of cards are dealt face up from the top of the draw pile to the player’s tableau.

The goal of Solitaire is to place the deck into four foundation piles, one for each suit, above the tableau.

It’s possible to build a hand by placing the exposed cards from the tableau columns or drawing a pile into the foundations in the suit. Classic Klondike Solitaire is one of the best free solitaire card games.

This game of solitaire, known as the spider, is played with two standard decks of playing cards. There’s common for just one, two, or four cards in each deck, with the number of suits corresponding to the degree of difficulty. The game board has a tableau, stockpile, and waste pile.

The goal is to build up from the Ace to the King by stacking 13 cards of the same suit. When a set is finished, it is placed in a foundation immediately. This is one of the best free solitaire card games.

3. The Game of Solitaire Using a Cube

In the popular version known as “cube solitaire,” one standard deck of 52 cards is used to play four different suits.

This free version is excellent for both novice and seasoned card players. The game’s object is to play all the cards from the tableau to the foundation pile in sets of the same suit, from ace to king.

There is a tableau, a stock, and a foundation pile on the cube solitaire board. This is also one of the best free solitaire card games.

The Pyramid version of the popular solitaire game is quick, only requires a few moves, and is easy to learn.

The game aims to form a seven-level pyramidal tableau with 28 face-up cards. The leftover cards go into a draw pile.

The game’s object is to eliminate tiles from the pyramid by matching them in pairs with a total value of 13.

Two cards from the pyramid’s face-up pile or one from the draw stack are used to make pairs. Ascension Solitaire is one of the best free solitaire card games.

The original Canfield game was named after a Florida casino owner, even though Klondike is often referred to as Canfield.

The last pile of 31 cards is used for the random drawing. The player’s objective is the same as in previous variations: move all cards to the four foundation stacks to be stacked in ascending order of each suit. This is one of the best free solitaire card games.

6. Can You Beat Yukon Solitaire?

Yukon Solitaire is similar to Klondike Solitaire, except that the initial set of cards and all cards are moved as the game begins.

Although identical to Klondike, the draw pile has been replaced by dealing all remaining cards face up into the tableau stacks.

The player’s objective in both games is to move all cards of the same suit to the foundation stacks in the highest possible order.

Despite its apparent simplicity, the accordion game presents players with many strategic options and challenges. All 52 cards are arranged in a row in the setup, making the deck as compact as possible.

Regarding variations on solitaire, FreeCell is the closest to Classic Solitaire, but it’s also the most strategic.

Cards from a single deck are shuffled and distributed into seven separate stacks. The game’s objective is to place all cards from the tableau onto the foundations in descending order. FreeCell gets its name from having four unfilled cells on the tableau.

9. Solitaire with a Baker’s Dozen

This card game aims to move all 52 cards from the tableau to the four foundation stacks to increase the ace value sequence.

You may arrange the columns in whatever order you wish, unlike in specific other versions of the game.

The term “Tripeaks” comes from the three peaks of a pyramid created by the cards in the tableau.

To play Tripeaks, you’ll need a 52-card deck and three 4-row pyramids. Four cards are exposed at the bottom of each pyramid, while the rest remain face down.

The remaining cards are stacked in a particular location known as the Stockpile.

To win, you must eliminate all the cards in your tableau. To deconstruct the pyramids, the player must form sequences of cards that are either one point higher or one point lower than the previous card, regardless of suit.

The vast majority of these games also have quick-fire online variants. The MPL software includes three variations of solitaire: the traditional game, Solitaire on a Clue, the more modern Cube Solitaire, and the wacky Spider Solitaire.

There are no costs associated with playing the practice games, and you can even participate in tournaments with real people for real money. Keep trying to improve your score until the clock runs out.

The 15 Best Dreamcast Games of All Time

10 Best Sandbox Games of All Time