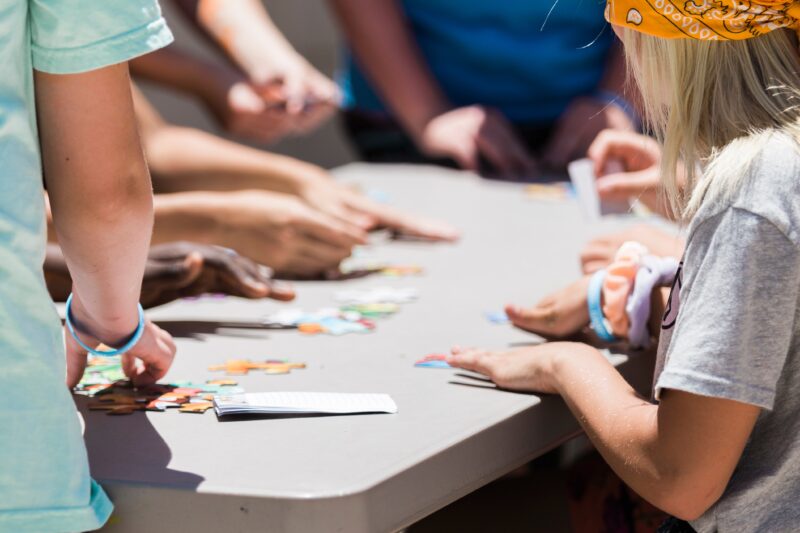 If you’re bored at school, you’re in luck. Plenty of fun games can be played with just one friend or a group. Here are the ten fun games to play with friends at school: 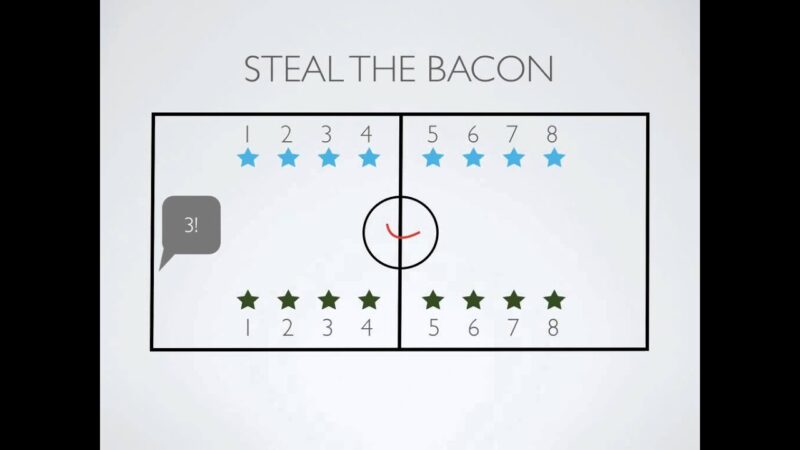 Steal the Bacon is a simple game you can play with friends.

There are two teams, and each team gets one dice. The game’s objective is for your team to get more points than the other team. Each player rolls their dice simultaneously and whoever gets the highest number wins that round. If there’s a tie, players continue rolling until there’s a clear winner.

For example, let’s say you have four on your first roll and another four on your second roll because no one else got higher numbers than yours; then you win two points!

After each round has ended, it’s time for everyone else in each team to steal some bacon from each other until they get caught stealing or until they run out of chances (depending on how long or short they want their game session).

In that case, all three members who were involved must escape back into their starting area without being caught by anyone else besides themselves before proceeding forward as usual otherwise, whoever catches them will gain 2+ points depending on how many times he/she caught them stealing plus one extra point if his/her teammate passed him/her. 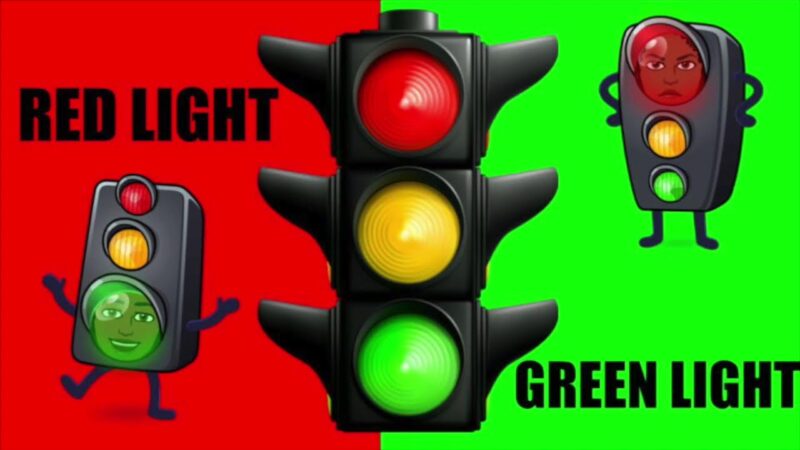 You and a friend are playing Red Light Green Light. One of you is the leader, and the other is the follower. You’ll need to play in an ample open space with room for both to run freely.

The game begins with the leader telling the follower to start running at full speed. After saying “red light,” which indicates that play has begun, he will shout out things like: “Stop!” or “Go!” These words are meant to change what direction or speed your partner should be moving in at any given time.

While waiting for another word like Stop!—then rules apply as usual: just say Stop! And move forward until hearing another command (or until told otherwise by their partner). 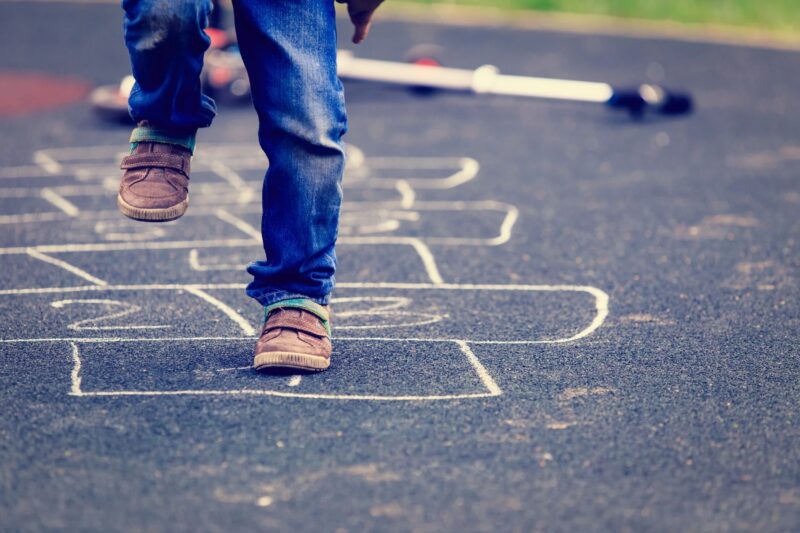 Hopscotch is one of the fun games to play with your friends at school. It’s easy to learn and doesn’t require many materials, so it’s great for a rainy day!

To play, all you need is chalk or sidewalk paint. You can draw the boxes yourself or use stencils. The game’s objective is to get your marker into each box in numerical order before everyone else does (starting with the number 1 and ending with the number 10).

Lemonade Stand is an excellent game for kids in the summer, making it one of the ten fun games to play with friends at school, but it can be played year-round. It’s one of the best ways to learn math and economics, emphasizing the latter. The goal is simple: sell as many lemonades as possible within a specific period while keeping track of your expenses and profits.

The rules are straightforward: buy enough lemons and sugar to make as many glasses of lemonade as you think you can sell (and remember to keep track of how much each item costs).

You’ll want at least two chairs or stools so that each player has somewhere comfy to sit while they wait for customers! Once everyone is set up, check in with each other periodically throughout the day—or night—to see how things are going.

This game isn’t just fun; it teaches kids valuable lessons about money management and entrepreneurship too! 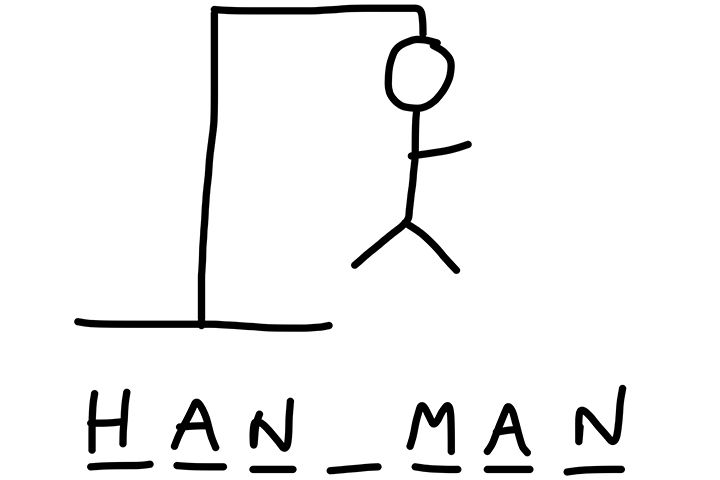 Hangman is a classic game that requires no special equipment and can be played with as many players as you have access to. To play, you will need paper and pencils for each player and one piece of paper with all the letters of the alphabet (this may also be known as a “Hangman’s Slate”).

Once everyone has their materials, begin by writing down an easy word like “hug.” This will serve as a placeholder until you are ready to start guessing letters. Each player draws one letter at a time from the slate until their guess matches the word on the placemat.

If they get it wrong, they lose their life (see below). If they get it right, they continue adding words or other clues until someone runs out of lives—at which point they become Hangman! 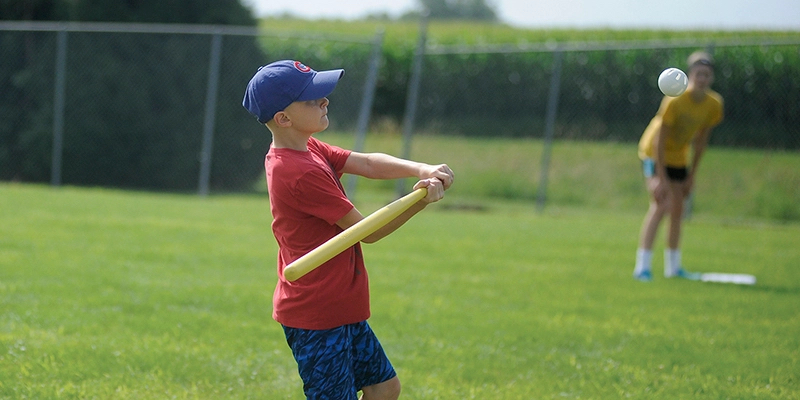 Wiffle Ball is a great game to play with friends at school. It can help you get exercise and have fun, too!

First, you’ll need to set up your Wiffle Ball field. To do this, place three bases 12 feet apart in the shape of a triangle on the grass (sand or dirt). Then put a home plate at one corner where all three bases meet up—and that’s it! You’re ready to play!

You can use any kind of ball for this game: baseballs, softballs, or even tennis balls will do. Whoever is batting first stands about 40 feet away from home plate and tries to hit the ball without letting it bounce more than once before hitting it into fair territory (the area past second base).

Once they hit it into the fair territory—either by hitting an object such as another player or stopping after hitting something else—they run around all four bases until reaching home plate again, where everyone else waits so everyone gets an equal number of turns playing offense (hitting) or defense (running).

If someone picks up your throw from the third base before running back towards the second base, they automatically make outs while also getting out yourself because you might accidentally step on their toes while throwing them back over there!

Freeze Tag is a fun game for younger kids to play in school. In this variation of tag, players are frozen when tagged. A teammate can unfreeze them. The last player standing wins!

An excellent way to teach freeze tag is by saying “freeze!”. Then everyone freezes and waits until someone unfreezes them by tagging them or blowing on their hand (if they’re hiding behind something). The person frozen must then freeze someone else before they can be freed.

So how do you play? First, decide who’s going to be “it” and give them some kind of marker (like a hat) or tell them they have to wear two hats at once so that everyone knows who’s “it” at any given moment in time, even if they don’t see one person running around with two hats on at once! Then start playing!

This simple game can be played with a small group of people. It is also suitable for students to play in the classroom during breaks, making it ideal for schools that allow additional downtime between lessons.

Choose someone to be the “breather” (this person will help keep time). Then have each student take three deep breaths and hold their breath until they feel like they can’t anymore—this will be their final breath count.

The breather should announce how many seconds have passed while they hold their breath, such as “four seconds.”

Now everyone retakes three deep breaths and holds them until you reach your final count from before: (the same number as before). If you are playing in teams or alone, whoever reaches that number first wins!

A football/soccer kickball game is fun because you can get a lot of players involved. The goal is to kick the ball and not be caught by a player from the opposing team. The first person who gets caught is out, and the game continues until there’s one person left standing.

It’s just like regular kickball, except that you’re allowed to use your hands to catch the ball—and you can also throw it back at people!

You’ll need to make sure you have a group of people to play with—ideally, at least six or seven, but even if it’s just three or four of you, that’s still fun. One person has designated “it,” and the other players are “lava.”

The lava must stay on the floor and cannot touch any part of their bodies (feet included!) to any surface except for their hands. The idea is for them to work together to get across the room without touching the floor or being tagged by IT!

We hope you enjoyed our list of 10 fun games to play with friends at school. These games can be played anywhere and are sure to bring a smile to anyone’s face!