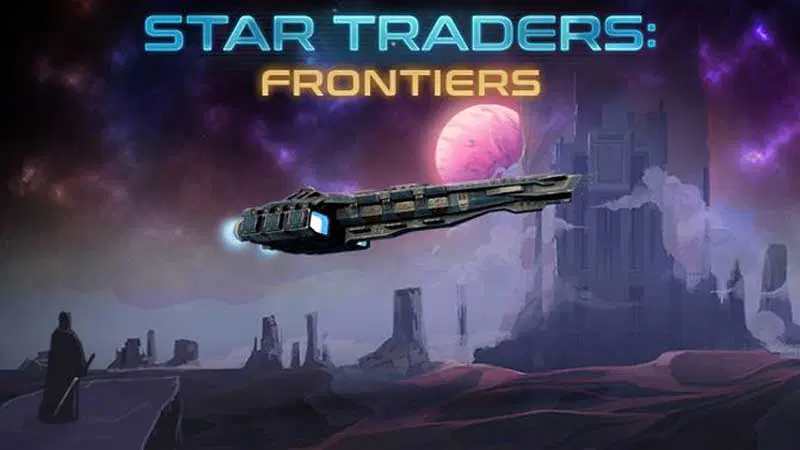 The core gameplay loop of star traders is fun: you get a quest, you go to your ship’s navigation console and set a course to find whatever it is you’re looking for, then when you arrive at your destination, you’re presented with choices for how to solve your objective. Star Traders: Frontiers is a role-playing game (RPG) and strategy hybrid that sets you in the far future, where the human race has spread across thousands of star systems but has collapsed into seven distinct factions.

Star Traders: Frontiers start by asking you to pick which faction you want to be part of. You can select from one of seven factions, each with its own strengths and weaknesses. After choosing a faction, you’re given a name and core profession for your character. You pick which faction to start as, set a name and core profession (either trader, mercenary, or bounty hunter), then work your way up from a nobody in the galaxy to one of its greatest heroes. The game does an excellent job of easing you into the story, which is presented in a gorgeous graphic novel style.

This process involves completing missions for each of your superior officers and completing quests given by other characters scattered throughout space stations and planets. These missions vary from simple fetch quests to epic battles against ships that are as powerful as yours with many guns blazing at once; it is never boring with the star traders: frontiers game.

The journey from scrub to saving the world isn’t straightforward

Star Traders: Frontiers is not a game you can jump into without having some idea of what you’re doing. It’s like playing through an RPG without ever reading the manual. You might be able to get by for a while, but there will always be something you don’t know how to do or where to go next. While there are tutorials that help acquaint players with the basics, they’re very basic themselves and won’t cover all the details needed to make your way through this epic space adventure (and we mean “epic” in both senses of the word; it is long and exciting).

The gameplay is simple but engaging. Each turn in Star Traders: Frontiers begins with you selecting one of four actions: move to a new system, scan the current system for resources and opportunities, engage in a space battle, or board another ship.

The first choice is the simplest, once you’ve moved through your ship’s turn (which takes some time), you can choose to drop out of FTL travel and explore nearby planets or stars for resources and information about what lies ahead on your journey. If you’re lucky enough to discover something interesting as part of this process like an abandoned ship drifting into oblivion, you can send out crew members to explore it further and reap whatever rewards lie within.

Moving between worlds is done via jump drives that take time depending on their distance from one another; while waiting for FTL drives to charge up again during this downtime period between jumps through space, players have access to their star chart where they can plot future courses based on their knowledge of the galaxy’s layout so far accumulated through exploration efforts conducted thus far during play sessions.

The Galaxy Map is the go-to screen for planning your next voyage. Here, you can see what’s out there in the vast reaches of space. Your current location is marked by a white circle with a black outline and will always be at the center of the map. You’ll notice that each system has a different color according to their names. To learn more about what’s in each faction’s territory (or yours), click on their symbol on the map to see their details page.

The Star Chart is where you’ll spend most of your time when playing Star Traders: Frontiers. In the top right corner of the screen, you can see a zoomed-out view of the entire galaxy, but you can also choose to view only local solar systems and nearby systems by using tabs at the bottom. The top left corner shows what system you’re currently in, along with its name (e.g., “Sector X1-7”) and a number of planets or moons orbiting it; there are also green markers for any ships that are present in this system.

If you see another ship nearby and have enough influence, you can choose to have a go at boarding it. If successful, there are five different types of items that may be stolen: cargo (for-profit or espionage), crew members (for recruitment or espionage), technology blueprints (to learn new techs for future use), power cells (to keep running your ship) and fuel cells/ammo for weapons all of which are needed in order for your ship’s engines/guns to function properly during combat missions.

Upgrading a whole fleet costs 20k credits per level (so an upgraded level 1 ship costs 20k credits). Each time you upgrade one of your fleets, it will get stronger as well as earn more experience points with each battle that it fights in. Additionally, there are various prizes that can be earned by upgrading fleets such as rare items or new ships/crew members; however, these prizes require some luck with finding them along with plenty of patience since they are extremely rare drops.

This option allows you to spend 500 credits per level on upgrading any selected ship within the same class as its current level (e.g., if this is set at Level 2 then any other Level 2 ships in its class could be upgraded). When upgrading a ship’s levels via this method it becomes stronger overall but does not gain any experience points from combat like when using Fleet Formation above; however, there are certain prizes available only through using Upgrade Ship instead so keep an eye out.

Star Traders: Frontiers is an extensive RPG with plenty of quests to keep players engaged for dozens of hours. The game has a lot going on, but it is fairly easy to get the hang of once you’ve played it a few times and learned how everything works.

The Top 5 GTA Games of All Time