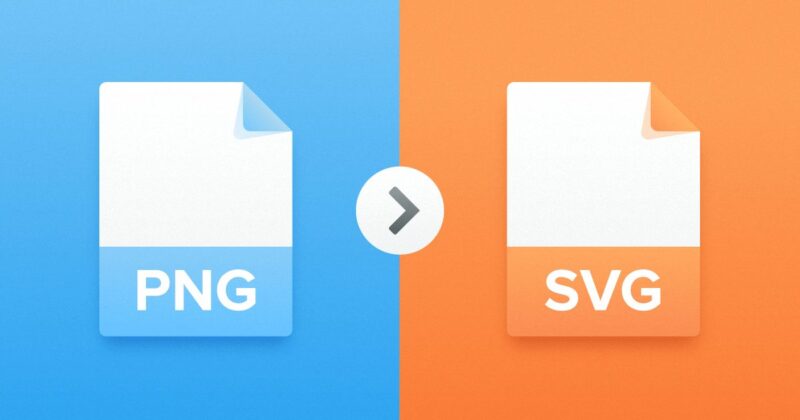 Imagine being able to create a single file that can be scaled to any size and is compatible with any device. Sounds too good to be true, right? Well, the Scalable Vector Graphics (SVG) file format allows you to do exactly that. SVG files are made of simple 2D graphics elements and can have their style, color or dimension changed without having to worry about losing quality. The best part: they’re completely free!

What is an SVG file?

SVG stands for Scalable Vector Graphics. It’s a file format that can describe both vector and bitmap graphics in a single file. SVG files can be used in web browsers, but they’re more commonly used to create images for use on the desktop—in applications such as Adobe Illustrator and Inkscape.

Where is SVG used?

SVG has many advantages over other image formats:

RealWorld Paint is the best free PNG to SVG converter that we’ve found. It’s a tool for converting PNG files to SVG files, but unlike other tools that require you to input text or drag and drop your images into a browser window, RealWorld Paint has a simple interface and is easy for anyone to use.

You can convert images in batches, so if you have several images that need converting at once (for example, when you want to make all of your project’s graphics into vector art), this will save time compared with doing them one at a time. The software also features batch processing capabilities so you can convert multiple images with just one click; this makes it possible for designers who work on websites or UI/UX projects where they need lots of vectors quickly!

ImBatch is a free batch image processor that allows users to convert images from one format to another, resize them, and add effects. This PNG to SVG converter can be downloaded here.

Read Also:  How to Stop Chrome from Saving Your Browsing History on Windows and Mac

To use this tool for PNG to SVG conversion, first, click “Open file” in the top left corner of ImBatch’s interface. You will then see a window for choosing which files you’d like to process with ImBatch. Navigate through your computer until you get to the folder containing your .png files (or other images) in question; once there, select all of them by holding down shift while clicking on each one individually or by clicking on an empty space inside the folder and pressing CTRL + A (or CMD + A). Now click “Open” at the bottom right corner of this window, which will bring up another window asking how many files should be converted at once? Be sure not to exceed 10 per batch job since it can cause issues during processing if too many processes are running simultaneously on one machine. Once done selecting which images should be converted into SVGs, click “Start Processing” at the bottom left corner of ImBatch’s interface.

Converseen is a free and open-source batch image processor that supports a wide range of image formats. It’s available for Windows, Linux, and Mac, which makes it ideal if you want to convert PNG to SVG on all your devices.

Converseen is also free and open-source software licensed under the MIT license. This means that anyone who wants to use Converseen can do so without paying any fees or royalties!

LibreOffice Draw is a vector graphics editor that can be used to create logos or other images. It works on Windows, Linux, and Mac OS. The tool is available in English, German, Spanish, French, and Portuguese as well as Russian and Chinese.

The application comes with many features such as auto-trace, support for vector layers (including gradients), pattern fills, and transparency masks. You can also add text boxes to your designs or import files from other applications like Adobe Illustrator and Microsoft Visio.

GIMP is a free, open-source image editing program. It has a wide variety of features and is available for Windows, Mac, and Linux.

GIMP was created by Spencer Kimball and Peter Mattis as a project at the University of California in 1996. The name GIMP stands for GNU Image Manipulation Program. Since then it has become one of the most popular alternative tools to Photoshop because it’s free and easy to use.

Read Also:  15 Best Endocrinologists in the United States (US)

GIMP is great if you want to crop an image or resize it with minimal fuss. It also lets you add filters such as blur or sharpen which can improve your photos quickly and easily (although not all filters are available). The toolbox on the left lets you access all of these features with just one click – making it ideal if you don’t want to spend hours searching through menus!

Expression Design was previously known as Microsoft Graphic Designer; it was released in 2007. The latest version (as of September 2018) is 3.0 which was released on October 26th, 2018.

Inkscape is a free and open-source vector graphics editor. It can create, edit and save images in Scalable Vector Graphics (SVG) or Adobe Illustrator (AI) format.

I hope that you understand now why it is important to keep track of your photos and documents by using an image converter. I also hope that this article helped you figure out which ones are the best for your needs. With any luck, you will have a new tool at your disposal that will make life much easier than before!

Sketch is award-winning sketching, drawing, and drawing app for anyone who loves to draw. Artists and illustrators love Sketch’s professional-grade features and highly customizable tools. Everyone loves Sketch for its smooth interface and natural drawing experience that doesn’t get distracting so you can focus on capturing and expressing your ideas. Sketch has a wide variety of features and is available for Microsoft Windows and macOS.

How to Create a Free Logo for Your New Website