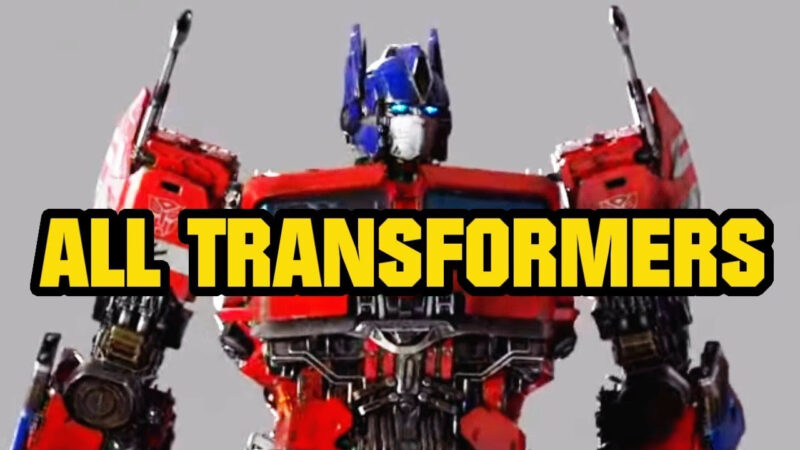 Transformers is a franchise that’s been around for more than three decades. In those years, there have been five different Transformers movie franchises, with two more on the way. If you’re like me, you’ve probably watched them multiple times but can never quite remember what order they go in. So here’s the complete list of every Transformers movie so far and how to watch them:

Directed by Michael Bay and starring Shia LaBeouf, Megan Fox, and Josh Duhamel, Transformers is the first installment in this epic sci-fi series. The plot follows Sam Witwicky (LaBeouf), who has to save Earth from a Decepticon invasion when his new car is actually an Autobot named Bumblebee. He teams up with Mikaela Banes (Fox) and her father, Sector 7 agent Captain Lennox (Duhamel), to save the world from Megatron and his evil allies. Released on July 4th, 2007, with a budget of $150 million dollars, it raked in $319 million worldwide during its theatrical run!

Transformers: Revenge of the Fallen (2009)

Transformers: Revenge of the Fallen is the second movie in the franchise. The film starred Shia LaBeouf and Megan Fox and was directed by Michael Bay. It was released in June 2009, grossing over $836 million worldwide.

In this sequel to 2007’s Transformers, Sam Witwicky continues his battle with the Decepticons while trying to avoid a war between them and the U.S. government that could result in his own death. Meanwhile, a secret organization has discovered ancient Cybertronian technology buried beneath Egypt’s pyramids—technology that could help humans take their place as masters of Earth or destroy them entirely!

Transformers: Dark of the Moon is a 2011 science fiction action film based on the Transformers toy line. It is the third installment in the live-action Transformers film series and is a sequel to 2009’s Revenge of the Fallen, with Shia LaBeouf, Josh Duhamel, and Tyrese Gibson reprising their roles.

The story follows Sam Witwicky (LaBeouf) and his best friend Bumblebee on another mission to save Earth from destruction by Decepticons led by Megatron. They plan on using an AllSpark fragment hidden in Hoover Dam to restore Cybertron before destroying mankind. Michael Bay returns as director; he worked with Steven Spielberg, who produced this film along with Don Murphy, Tom DeSanto, and Lorenzo di Bonaventura all returning from previous installments.

The story follows Cade, a mechanic at an auto repair shop in Texas. He buys a truck from his friend Lucas Flannery and discovers it to be Optimus Prime – who has been dormant for thousands of years. When two Cybertronians arrive on Earth looking for Optimus Prime, they discover he’s already gone. Hence, they take him instead with them back home – leaving behind only his weapon, which Cade gives to his daughter Tessa before heading out on an adventure with her boyfriend Shane and Bumblebee, who later meets up with Hound (who was sent by General Morshower). Their adventures lead them to meet up with Galvatron (leader) and Lockdown, who are after Optimus Prime since he doesn’t want anything more than peace between robots. In contrast, Lockdown wants revenge against those responsible for his brother’s death during World War 1!

Transformers: The Last Knight is the fifth and final movie in the Transformers series. It was released in 2017 and starred Mark Wahlberg. This movie is directed by Michael Bay, who also directed all of the previous Transformers movies.

The movie takes place in the future—about 150 years from now—and it’s set on Earth, which has been entirely destroyed by alien robots called Decepticons (which are basically Transformers). To combat this threat, humans have created their own group of robots called Autobots (basic heroes). To save humanity, a couple named Cade Yeager (Mark Whalberg) and Vivian Wembley (Laura Haddock) must work together with Optimus Prime (Peter Cullen) and Bumblebee (Dylan O’Brien), Sqweeks (Fry), Wheelie, and several other bots. At the same time, they explore an ancient tomb where they hope to find answers about their past enemies.

This movie has many explosions throughout its runtime and tons more action than any other Transformers film before!

Bumblebee is the sixth installment in the live-action film series. It acted as a spin-off from the live-action series and was released on December 21, 2018. It was also the first film in the series to be rated PG-13 by the MPAA for sequences of sci-fi action violence, language, and some crude humor; it is also notable for being directed by Travis Knight (Kubo and the Two Strings) instead of Michael Bay (Transformers).

The movie follows a young girl named Charlie (Hailee Steinfeld) who sneaks into an old abandoned movie theater where she discovers Bumblebee (voiced by John Cena), a prototype Transformer whose memory has been wiped clean after an attack by Decepticons led him to crash land on Earth years prior.

This is a list of all the Transformers movies in order. Bumblebee (2018) is the latest one, and it’s the only one without Michael Bay as a director.

Top 5 Nollywood Movies on Netflix That You Should Watch

Interceptor Full Cast and Their Roles