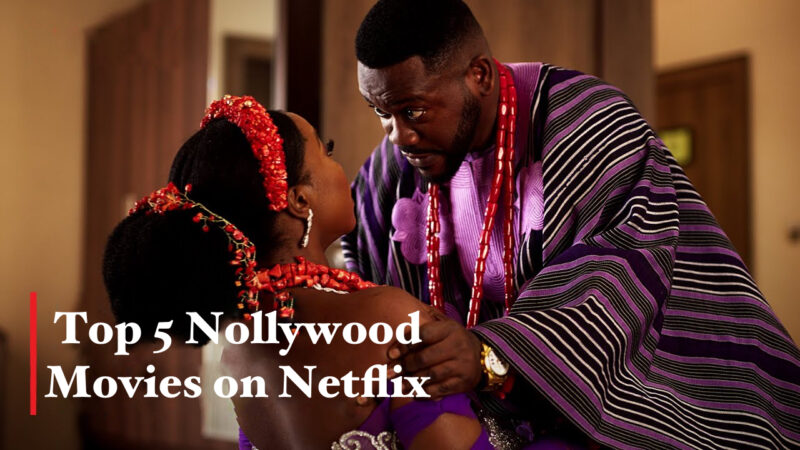 Nollywood has broken so many records on Netflix since its expansion into Nigeria. The company has partnered with Nollywood filmmakers like Mo Abudu, Kemi Adetiba, Kunle Afolayan, Mo Abudu, and Jade Osiberu to produce record-breaking movies. Netflix has unarguably contributed to the growth of Nollywood since this partnership in 2020.

Every year, more Nollywood movies are churned out on the platform, thereby putting the industry on the map.

The most recent one is the limited series, ‘Blood Sisters’ produced by Mo Abudu gained global applause and was rated top 10 in over 30 countries worldwide.

From all indication, Nollywood has grown past the days of Asaba movies and are slowly gunning for Hollywood standards.

So let’s talk about some of the Nollywood movies on Netflix in 2022.

Blood Sisters is a four-part limited series that tells the story of two best friends, Sarah, and Kemi, who become fugitives after murdering a high-profile man. They find themselves running away from the law and the family of their victim.
Blood sisters broke many records, including Netflix’s top 10 global movies, and has remained one of Nollywood’s most talked about series.

It is a compelling binge-worthy crime series and time worthy, and below are Blood Sister’s achievements since it releases on 5th May 2022.

The ‘Man of God’ movie tells the story of a man who forsakes his religious background due to his harsh experience since childhood. He went ahead to live his own life. His soul remains caught between the world and the Christian faith he left behind. On the one hand, three women were vying for his heart; on the other, the love of God, lust for money, and his deep resentment for his Pastor father wrestling for his soul.

The movie is based partly on the famous prodigal son’s story in the bible. It is dramatic and worth watching.

AMINA is the story of a 16th-century Nigerian princess who learns to fight so that she can take over the throne and become the first female ruler. Amina was directed by Izu Ojukwu and featured Lucy Ameh, Ali Nuhu, Clarion Chukwurah, Madaki Asabe, etc.

Amina is a film set in the 16th century with collaborations across Africa, Europe, and America. The storyline is simple and action-packed with the use of English, Hausa and Igala languages to show the life and times of Queen Amina.

According to the movie producer, Ogunjiofor, the cast was engaged in pre-production training where they had to be in a camp for three months and were trained on how to ride horses and use swords before they commenced the actual shoot for the movie. This is highly commendable and shows that Nollywood has grown immensely.

Fine wine is a beautiful love story that shows two people in love despite the age gap. It is directed by Seyi Babatope and stars Richard Mofe-Damijo, Ego Nwosu, Nse Ikpe-Etim, and Zainab Balogun.

Fine Wine follows a story of a lonely but rich older man, played by Richard Mofe Damijo, who genuinely falls in love with a younger woman (Ego Nwosu). They both find themselves fighting against society and their previous love life. Fine Wine is a mushy and feel-good movie. If you are a fan of the Romance genre, then this movie is for you.

God calling is a Nigerian Christain film that tells a story of redemption that looks at the life of a young married woman, her family, and her faith.

In summary, the Nigerian movie industry has experienced tremendous growth in the past few years, especially in storytelling, production, and acting. Top film institutions have also recognized it worldwide, and we expect Nollywood to keep breaking these records and place Nigeria on the map where it rightfully belongs.

Let us know your favorite Nollywood movies on Netflix.