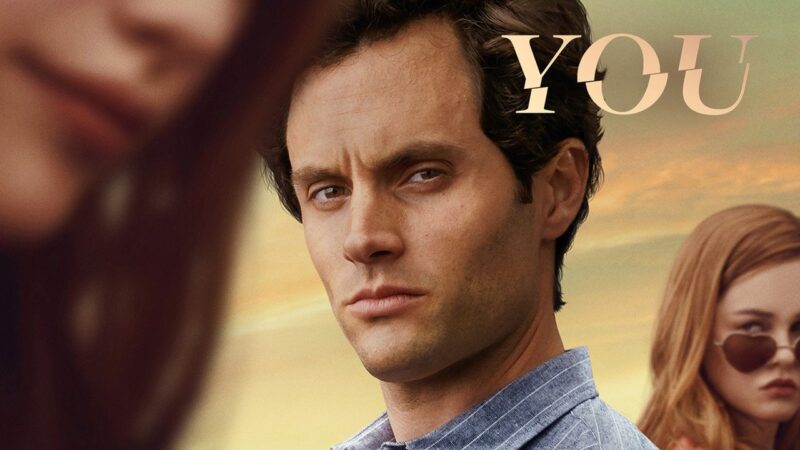 You (Season 3) cast: On January 14, 2020, Netflix announced that the streaming service would produce a third season of the American psychological thriller television series You. In it, Joe Goldberg’s tumultuous relationship with Love, who is carrying his kid in a new suburban house, is seen to continue.

Love is pregnant with Goldberg’s child. Greg Berlanti and Sera Gamble, responsible for creating the “You series,” will be back on board as co-executive producers, and Gamble will continue in her role as showrunner.

The parts formerly played by Penn Badgley, Victoria Pedretti, and Saffron Burrows, who was promoted to a series regular, will be returned.

Shalita Grant, Travis Van Winkle, Dylan Arnold, and Tati Gabrielle are among the newest additions to the cast. After the second season, Michaela McManus appears on screen as Joe’s new next-door neighbor.

The third season’s production was halted in December 2020 for two months owing to the COVID-19 epidemic, and it did not begin again until February 2021. On October 15, 2021, the first episode of the season, which would total ten, was shown.

In the third season, Joe and Love have just been married and are settling into their new life as parents in the made-up community of Madre Linda in California.

As the chemistry of their relationship shifts in a new direction, Joe continues to go through the motions of his fixation with a growing interest in Natalie Engler, their neighbor who lives next door.

This time, Love decides to rewrite the story to ensure that Joe’s compulsions would not derail her goal of creating the ideal family in such a straightforward manner.

However, after Natalie’s death at the hands of Love, Joe’s fixation shifts to Marienne, a librarian with whom he shares a traumatic past in the foster care system.

Love and Joe’s relationship is further complicated by the fact that Natalie’s stepson Theo has developed romantic feelings for Love.

You Cast and Their Roles

Michaela McManus stars as Natalie Engler, the second wife of Matthew Engler. She is the keeper of a hidden existence and becomes the new object of Joe’s fascination throughout the show. She is one of the You (Season 3) cast.

Marienne Bellamy, played by one of You (Season 3) cast Tati Gabrielle, is a no-nonsense librarian dealing with some personal issues while attempting to build a brighter future for herself and her little daughter, Juliette. Marienne is one of the You (Season 3) cast.

Scott Speedman stars as Matthew Engler, Joe’s next-door neighbor, a wealthy CEO, spouse, and reclusive parent. He is reticent and maybe a little mysterious at times. Scott is one of the You (Season 3) cast.

One of You (Season 3) cast, Travis Van Winkle, plays Cary Conrad, the self-proclaimed creator of his own supplement company, in the third season of You. Conrad is affluent, personable, and owns his own business.

Travis Scott Van Winkle is an American actor born on November 4, 1982. He is best known for his roles as Trent Sutton-DeMarco in Transformers (2007), Friday the 13th (2009), and Lieutenant Danny Green in The Last Ship.

Shannon Chan-Kent is a voice actor and stage actress from Canada. She was born on September 23, 1988.

She is famous for her roles as Silver Spoon and Smolder, as well as for providing the singing voice of Pinkie Pie in My Little Pony: Friendship Is Magic.

She also provided the singing voice of Misa Amane in the English dub of Death Note, as well as the Biskit twins and Youngmee Song on Littlest Pet Shop. Additionally, she plays the role of Joy Pepper in the reimagined version of Superbook, the Chief in Pucca, and Courtney’s closest friend Janet in Spectacular!

As one of You (Season 3) cast, Shannon Chan-Kent stars as Kiki, a famous life coach who is also a dedicated part of Sherry Conrad’s inner circle.

Another You (Season 3) cast is Michaela McManus, who starred as Natalie Engler, the second wife of Matthew Engler.

She is the keeper of a hidden existence and becomes the new object of Joe’s fascination throughout the show.

Saffron Domini Burrows is an English actress and model born October 22, 1972. She has acted in several films, including Circle of Friends, Wing Commander, Deep Blue Sea, Gangster No. 1, Enigma, Troy, Reign Over Me, and The Bank Job, among others.

She is best known for her roles as Dr. Norah Skinner on My Own Worst Enemy, Detective Serena Stevens on Law & Order: Criminal Intent, and Victoria Hand on Marvel’s Agents of S.H.I.E.L.D.

She has also appeared as Lorraine Weller on Boston Legal, Dr. Norah Skinner on My Own Worst Enemy, and Serena Stevens on Law & Order: Criminal Intent.

Terryn Westbrook is a well-known American actress who has worked in various mediums, including movies, advertisements, and television series. She is one of the regular You cast who started as Margaret Brigham, Gil’s

Romy Rosemont is a well-known American actress born on October 28, 1964. She is most known for her roles in Shark, Grey’s Anatomy, CSI: Crime Scene Investigation, Prison Break, and Private Practice.

Her breakout role as Carole Hudson in the American musical television series Glee came in 2010.

Rosemont is married to actor Stephen Root, who made their on-screen debut in the episode of Fringe’s fourth season, “And Those We’ve Left Behind.” Rosemont is also an actress.